We browsed through the competition programme 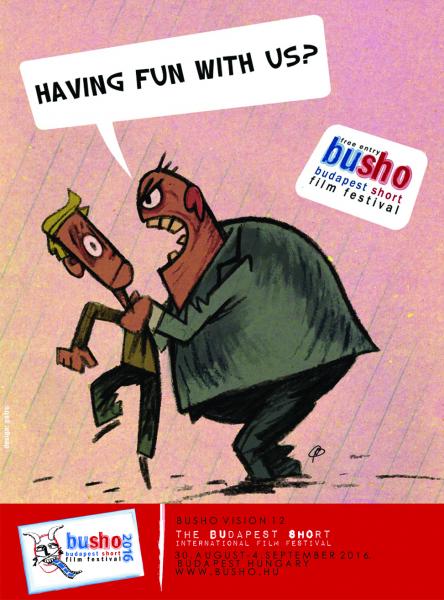 Just as we earlier indicated, 74 works made it to the competition programme of the 12th BuSho edition, and we found some interesting ones! The lovely Russian short, which was nominated for the Best Animation Oscar “We Can’t Live Without Cosmos” and the excellent production of the Estonian animation school “Isand” and Edmond, a festival favourite with many awards made it to our competition programme as well. We have yet another Best Animation Oscar nominee: Patrick Vollrath’s Alles wird gut aka Everything Will Be Okay, and we also have a new work from the creator of the previous experimental crowd-pleaser “Metube”: Daniel Moshel submitted his homage to Carmina Burana. There are several co-productions as well, such as: Getting Fat in a Healthy Way (Bulgaria/Germany) or L'ours noir / The black bear (Belgium/France), which tells the story of a plush bear who attacks naked tourists in the forest... We would like to mention our re-attendees, such as the creative duo from Israel and ‘2007 Golden BuSho winners Erez Tadmor & Guy Nattív (Offside), the director of Tous les hommes s'appellent Robert and our former guest Marc Henri Boulier, or Mathijs Geijskes, who can boast of 3 previous contender films in the competition section. The audience can spot world stars in some works: John Hurt appears in the socio-drama Break, and one of the producers of the sci-fi Zero is none other than Sir Ridley Scott! The topic of migration will not be omitted: the film Boat People tells the story of a ship-wrecked migrant, who climbs up onto the yacht of a wealthy couple. The genre of animation can be deemed as well-represented among Hungarian works, the most submissions came from MOME. The film buffs may find quite a few familiar creators. The most successful studios submit their actual compilations, such as Aug&Ohr and Hamburg Media School from Germany, Promofest, Kimuak from Spain or Russian Mir Festivals and Festagent, and we are proud to announce that each time we have new international agencies coming up with new compilations As a wrap-up we can say that those who take the pilgrimage to Puskin Cinema, or Corvintető in the evenings or any venue at the countryside or over the border or our old-new venue Örökmozgó (aka Vörösmarty) will find exciting programmes!