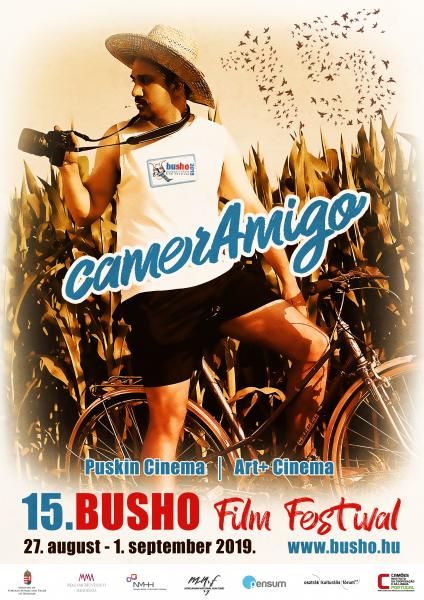 The compilation of the 15th BuSho Festival posed quite a challenge for our 5-members strong Pre-Jury, which they also reiterated in their summaries, and highlighted that the number of quality shorts exceeded the limit available for the competition programme. Indeed, if we take a statistical approach: 70 creations were selected as competition programme out of the nearly 1000 submissions, thus making up only 7% of the films screened by our selectors – but, naturally the time constraint is the main factor to take into consideration. Without too much of self-aggrandizing: they made the best choices and distilled the essence for our audience – for which we compiled a little appetizer from Hungarian creators.

Where to start... ah, yes! Parallel to the boom of the full spectrum of Hungarian shorts, the animation genre grew to a respectable extent and bore beautiful fruits in doing so. Mr. Mare by Luca Tóth made its world debut without speaking a single word at the 69th Berlinale, but at the same time told a story about condition-free, unilateral love, disillusionment, vanity and sexuality. The film of Anna Flóra Buda, titled Entropia that she created for her graduation at Moholy-Nagy University of Art and Design was screened also at Berlinale, and received the Teddy price of the independent jury due to creations involving LGBTQ topics. In her animation “Prime Numbers” – also a graduation film made at Moholy-Nagy University of Art and Design, Anna Ottlik observes the effects of childhood traumas on the adult person.

The mood of the Festival is always elevated by very short sketches. After his earlier creation “Memmod”, Gergely Tápai is here to prove this with #GoodDeed – telling a story involving a homeless person; or the excellent one-minute short of Ábel Regős’ The Tenants which explores a sensitive social topic. In “From Above”, Nándor Lőrincz and Bálint Nagy highlight a similar topic, featuring camera angles known from reality TV thus making us a witness of the escalation of a single argument occurring at the annual curb side pick-up. Although we state each year that it is impossible to construct key topics from such a vast starting material, however, it is inevitable to sidestep our everyday topics, such as migration, as shown by Balázs Wizner’s “Strange sounds”. Attila Dávid’s film “Jakab” was awarded the prize for the most promising young director at Friss Hús Budapest International Short Film Festival for showing the mysteries of human soul in a unique way; Rozália Szeleczki also received an award for “Mrs. Rozgonyi” an adaptation of the ballad with the same title written by the great Hungarian poet [who also translated Shakespeare’s plays into Hungarian]. One of our great comebacks is thanks to Márton Szirmai who brings us joyful moments in the short “Out of character” created with his long-standing crew (featuring et al Barnabás Tóth, György Pálos, Mihály Búzás).

Although it was its documentary “Ultra” – on the ultra-marathon competition, which was also nominated for a European Film Award in 2017 – that brought the great break-through for Balázs Simonyi [Bart Simpson’s voice in Hungarian], we have to open a dedicated chapter to him in the BuSho-History Book. After browsing old catalogues let us remember a few of their gems in a taxative manner: we screened the Neon lights of Budapest in Kultiplex, and the Field study films co-created with Barna Tóth at the times when they were members of the Momentán ensemble; later we featured Original Lager, One vote, Tour, Finale (with a remarkable producer) and “Indian” his latest audience-favourite – which was censored by the comrades in Belarus – that is they banned it from the screening... The core concept of his newest film, Banality was inspired by the terror attack at Boston Marathon – on which he also took part – which made him realize that violence has crept into our lives and is increasingly deemed as an integral part of it.

And last, but not least... let’s see the long-winded creations that usually deal with more serious topics, such as “The Mentor” by Szonja Szabó, which commemorates the victims of the so called “Blue Whale” internet phenomenon that made headlines a few years ago; or “Katapult” by Balázs Szövényi-Lux, in which the protagonist, Gau builds a structure spanning over time and space to meet his love again. The film of Pici Pápai, Pigeonberry tells the story of a little boy who perceives the illness of his mother and his own anxiety as a magical threat. The crew of Miklós Borsos’ The Big Shot tries to film the last scene of a film, in which a man drowns – without much success.

Last but not least, we have to mention the graduation film of Gyöngyi Fazekas (Metropolitan University) “The Orange Passport” depicting a country not so far-far away where the State interferes in the procreation of its citizens.

Naturally, we will miss our greatest ones, or rather who were left out of the competition – but this means that it is worth staying with us at the Hungarorama section held on Saturday – because not everyone can be featured in the competition programme for specific reasons. Two lines, Dad’s heart, The Buzz, 147 marks or Village Fashion will be screened, and the single most important thing we can do is to invite you to come and visit Hungarian shorts!

The 15th BuSho International Short Film Festival will start on 27 August 2019 with parallel screenings in Puskin Cinema, Art+ Cinema, the Italian Culture Institute of Budapest, and in venues in the country side: at Búgócsiga in Sopron, in Modem in Debrecen and in Szeged Grand Café! www.busho.hu