IS THERE LIFE AFTER BUSHO!? 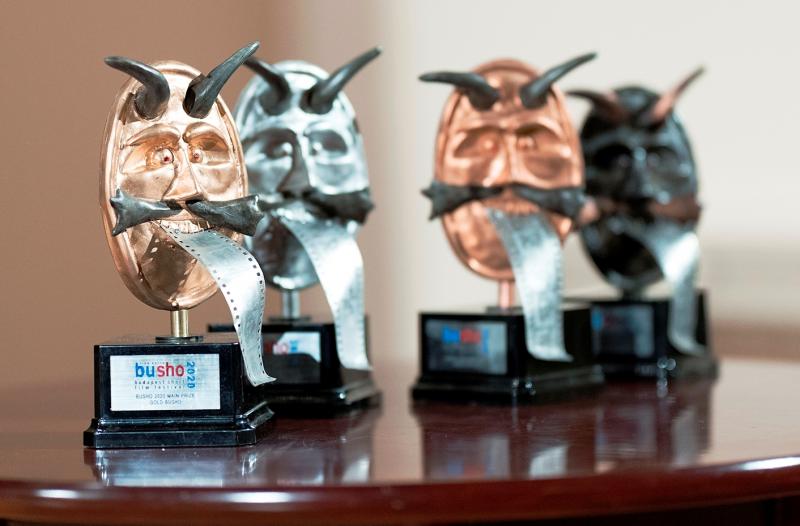 On Saturday evening, September 5, the awards of this year’s 16th BuSho International Short Film Festival were presented at the Fellini Hall of the Italian Cultural Institute. In terms of the field, it is truly international, with 66 short films from 23 countries competing for the sculptures, but for the first time in a decade and a half without international guests, who are exactly a dozen more fit in the group photo below.
(I don't like to comment publicly on decisions because everyone is usually offended by outspoken speech, but let me make a comment in parentheses because we can't go all out without a word: but the madness of the Hungarian public consciousness around the founding of BuSho could best characterize the madness that lasted for 3 days. After 3 days of thinking the night before arrival, all the competent bodies were able to squeeze together the answer that they do not know what the said exceptional case is and cannot take a position because the law has not yet appeared in the Hungarian Gazette and there was no such person. who would have done that, here and no further, let's move on to the subject.) 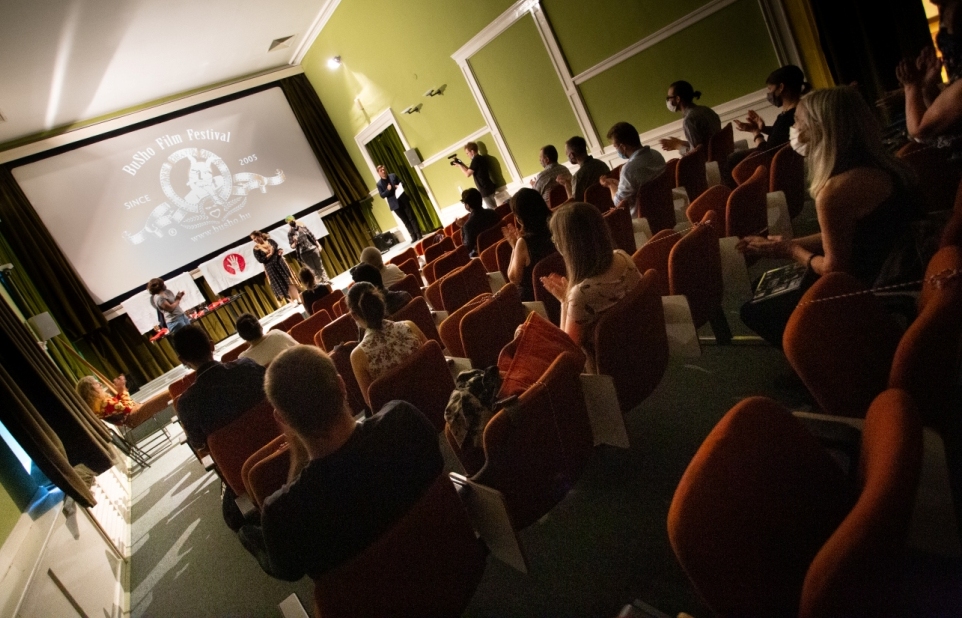 Of course, the screenings of the festival took place without the incomplete international and suspicious student jury members on the way, so Isti Madarász started announcing the results on the domestic stage. he does not give up to be judged once and for all with such a statuette. The members of the international jury present, namely Dér Asia, documentary filmmaker and Wolfgang Leis, the coordinator of the international jury, decided at a skype conference in the morning with the 2 excluded colleagues. They are Portuguese Carla Isabel Magro Dias, producer and program curator, director of the Fike Évora Festival, and Paul Bruce, screenwriter, director, producer, director of the Edinburgh Short Film Festival in Scotland. For the start the two remaining members of the Student Jury, Sára Mihálykövi (SZFE) and Zsófia Osztós (METU) shared their decision with the audience after evaluating in a few words how challenging it was to judge so many films, but in the end they really enjoyed it. So:
“The shortfilm was awarded to this film because it is an extremely high-tech work with an immersive atmosphere and visual world. The French Sororal, directed by Frédéric Even and Louise Mercadier, received the Best Animation Award.”
“The best fiction film has a great balance between tension and humor, with serious and important sayings beneath the surface. This is the Second Round, directed by Gábor Holtai.”
“Finally, Sándor Csoma's work, Casting got a special mention, because a difficult and dramatic story that perfectly displays vulnerability, will receive a special award. It deals with a very important subject, very authentically.” 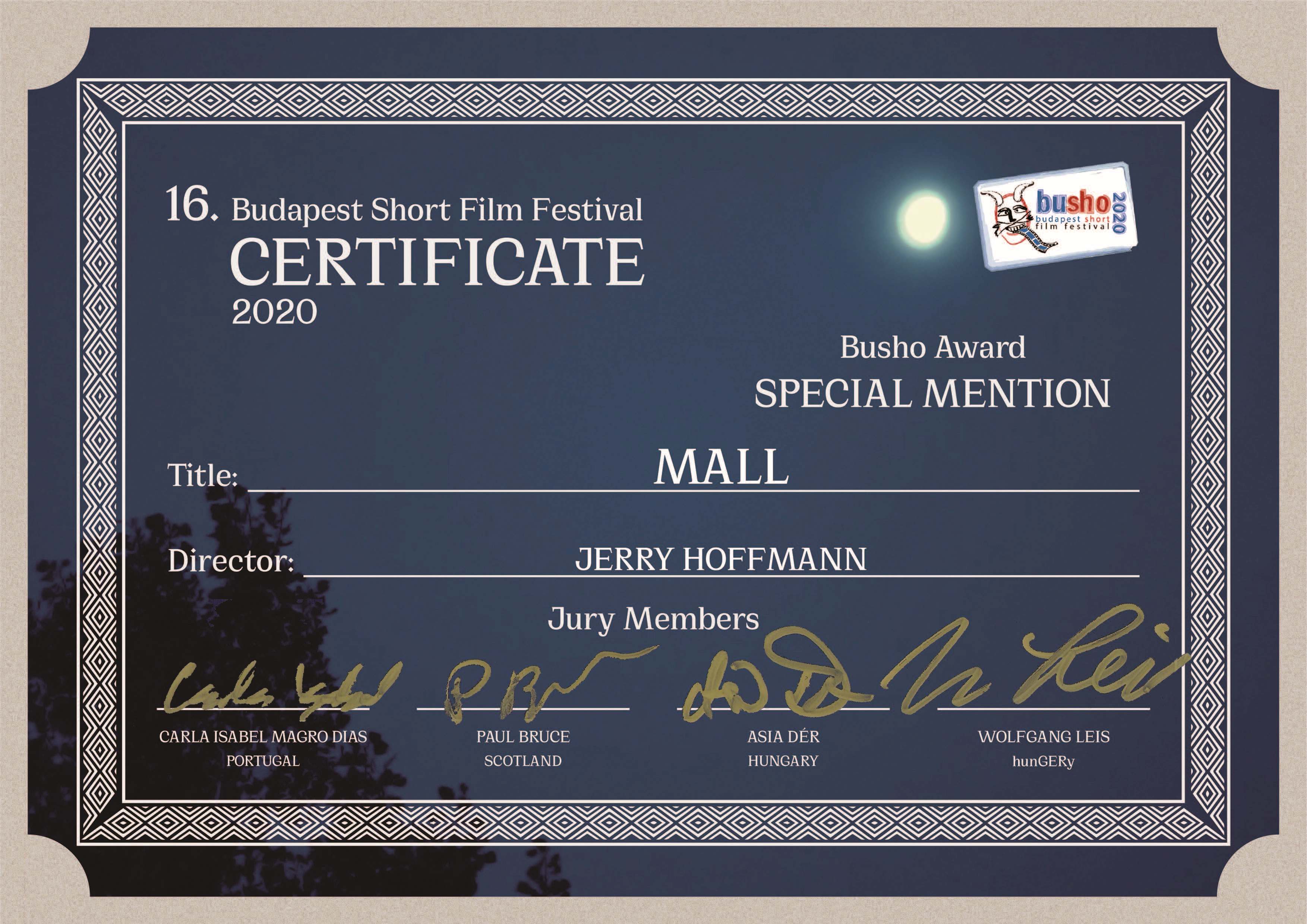 The winners of the international jury could have followed, listing first the winners who were unfortunately unable to be present at the awards ceremony, in this case all the excluded foreigners.
BuSho Award 2020 BEST ANIMATION – Daughter by Darya Kashcheeva (Czech Republic)
BuSho Award 2020 BEST EXPERIMENTAL – Selfies by Claudius Gentinetta (would have come from Switzerland)
BuSho BEST CINEMATOGRAPHY – Tobias Hochstein in Moondrops by Yoram Ever-Hadani (Serbia, would have come)
BuSho 2020 BEST COMEDY – The best orchestra in the world by Henning Backhaus (Austria, they would have come)
BuSho Special Jury Award – Mall by Jerry Hoffmann (Germany) 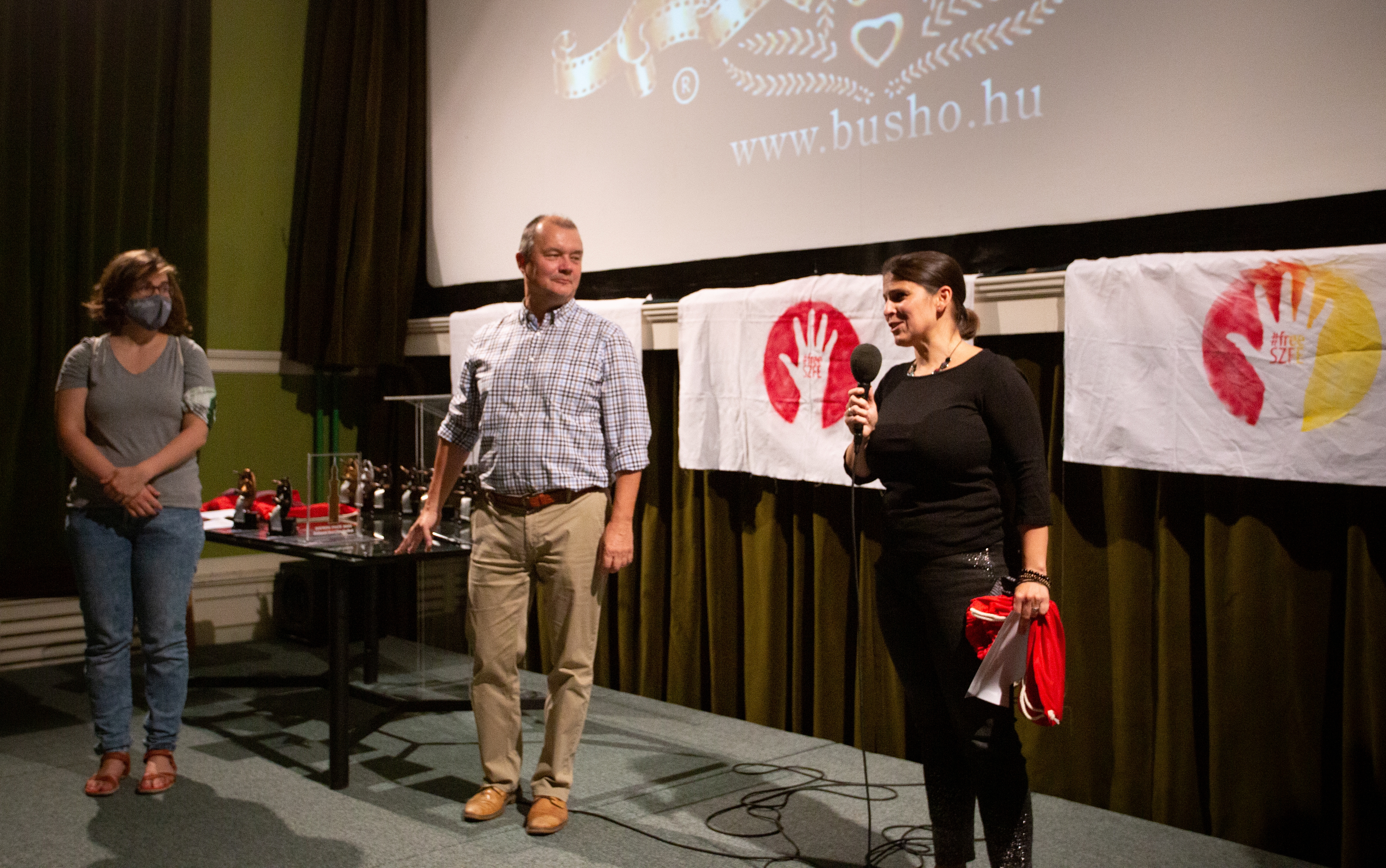 Those present could follow. For the first time, the National Film Institute's 2 x 500,000 HUF prize was awarded to the best Hungarian animation and the best Hungarian fiction film, presented by Ákos Pál, CEO, and then described the details of the renewed incubator program in a few sentences.
The best Hungarian animated film in 2020:
Andrasev Nadja – Symbiosis
The best Hungarian short film at the 16th BuSho Festival: Wrochna Marcell – If Once
The following category awards may have followed:
BuSho 2020 Best Performance Award: Kincső Blénesi in Casting, directed by Sándor Csoma
The special prize of the BuSho venue in Sopron, a trip to Sopron for 2 people, with a film screening and an audience meeting, presented by Tibor Takács, an employee of the Motion Picture Association, to Benő Baranyi for his work Anja. 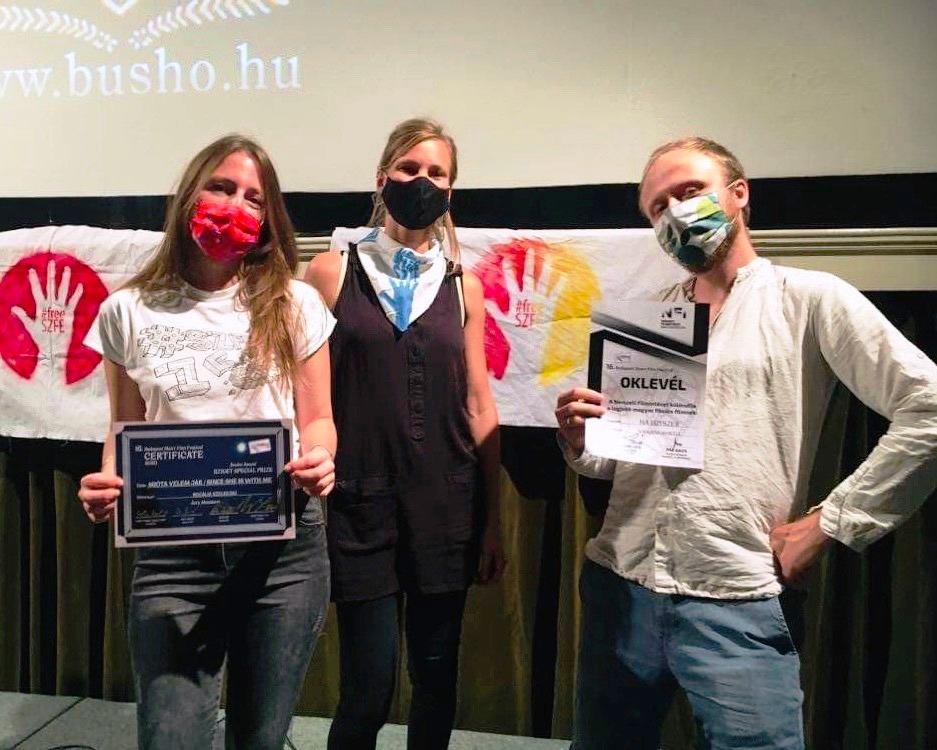 Sziget Kft.'s offer, a weekly ticket for a 3-person mini crew with a shooting license for the 2021 festival, this time with the graduation film of Rozália Szeleczki and Since she is with me, who set a new record for three years winning on the festival in a row.
Before the grand prizes were announced, members of the international jury were invited to the stage, and Dér Asia thanked last week for how many amazing works she had seen, but these were also very exciting. Getting into another person’s startling world was always eye-opening and interesting to see how much similarity the films of artists from all over the world carried. And then came the fanfares and the drumming:
“A work with a special visual world that keeps viewers energized throughout. And the acting of the children's actors is outstanding.” The winner of Bronze BuSho 2020 is Sunday, Andor Berényi's film, Hungary.
“A film based on an astonishing idea that tells a cheerful story with humor and empathy. Technically outstanding performance, combined with great acting.” The 2020 Silver BuSho Award went to Archibalds’ syndrome, Daniel Perez’s film from France! 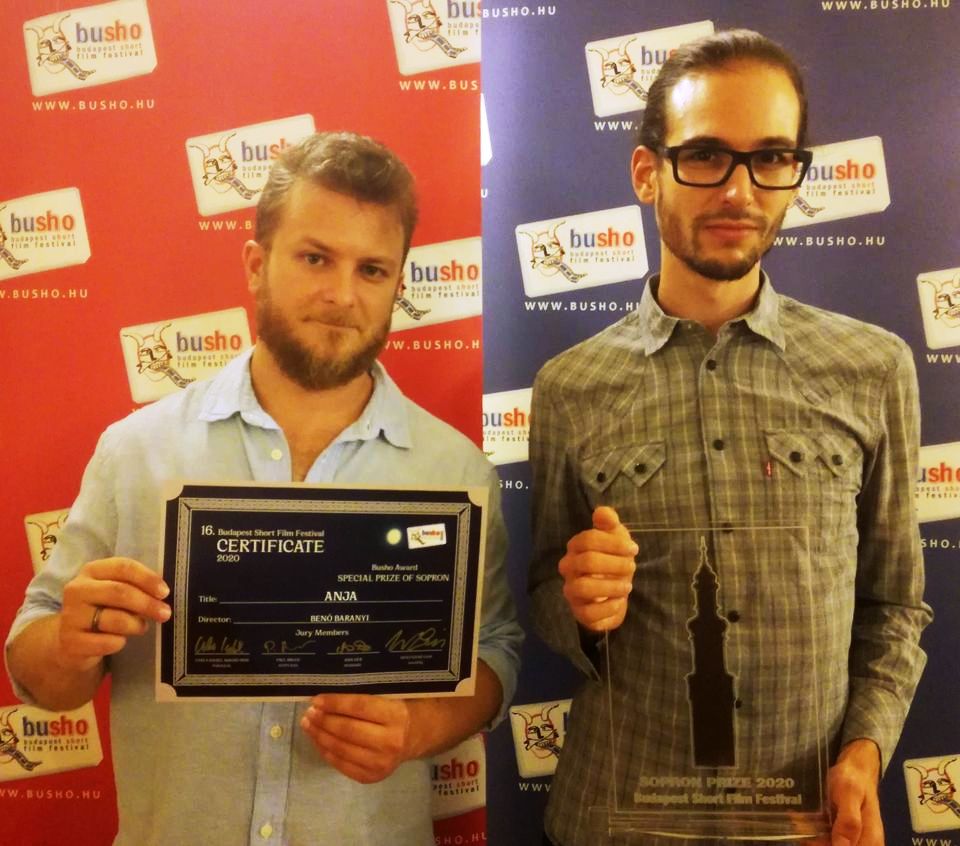 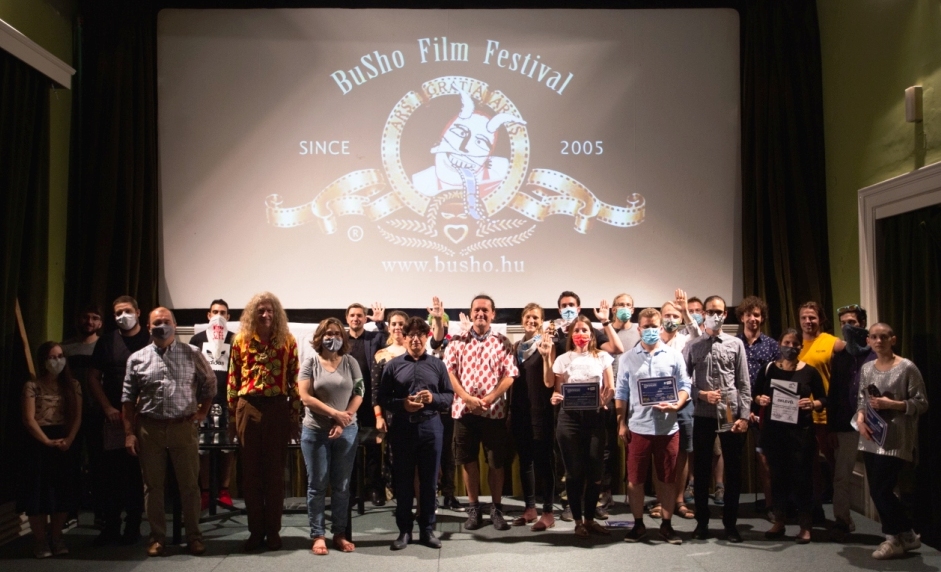