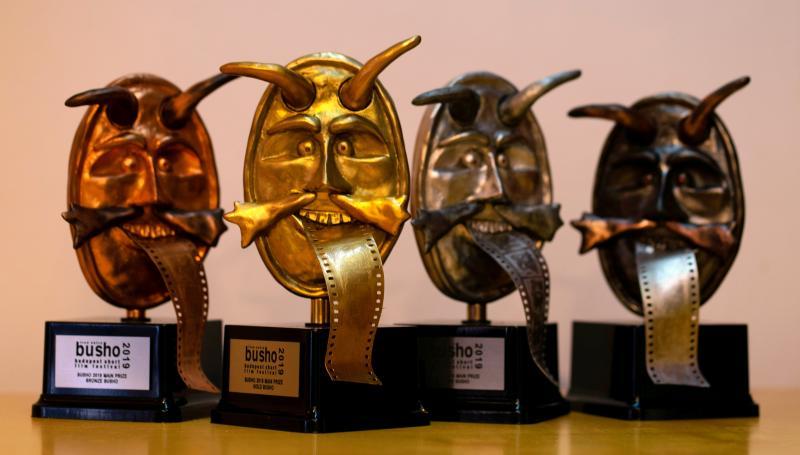 The prizes of the 15th Budapest Short Film Festival were presented in Puskin cinema in the evening of the 31st of August. Of the approximately 1000 total submissions 70 short films were screened in the competition program in Puskin Cinema, and subsequently at the repeated screenings in the evening in Art+ Cinema. The creators of the best films were awarded with the statuettes created by Solide Art – based on the decision of the International Jury and the Student Jury. The International Jury consisted of Kreet Paljas, animation professional from Estonia, Zsófia Szilágyi director, André Lameiras, the director of the Portuguese “BEAST Film Festival” and Wolfgang Leis jury-coordinator who has been with us through 15 editions. 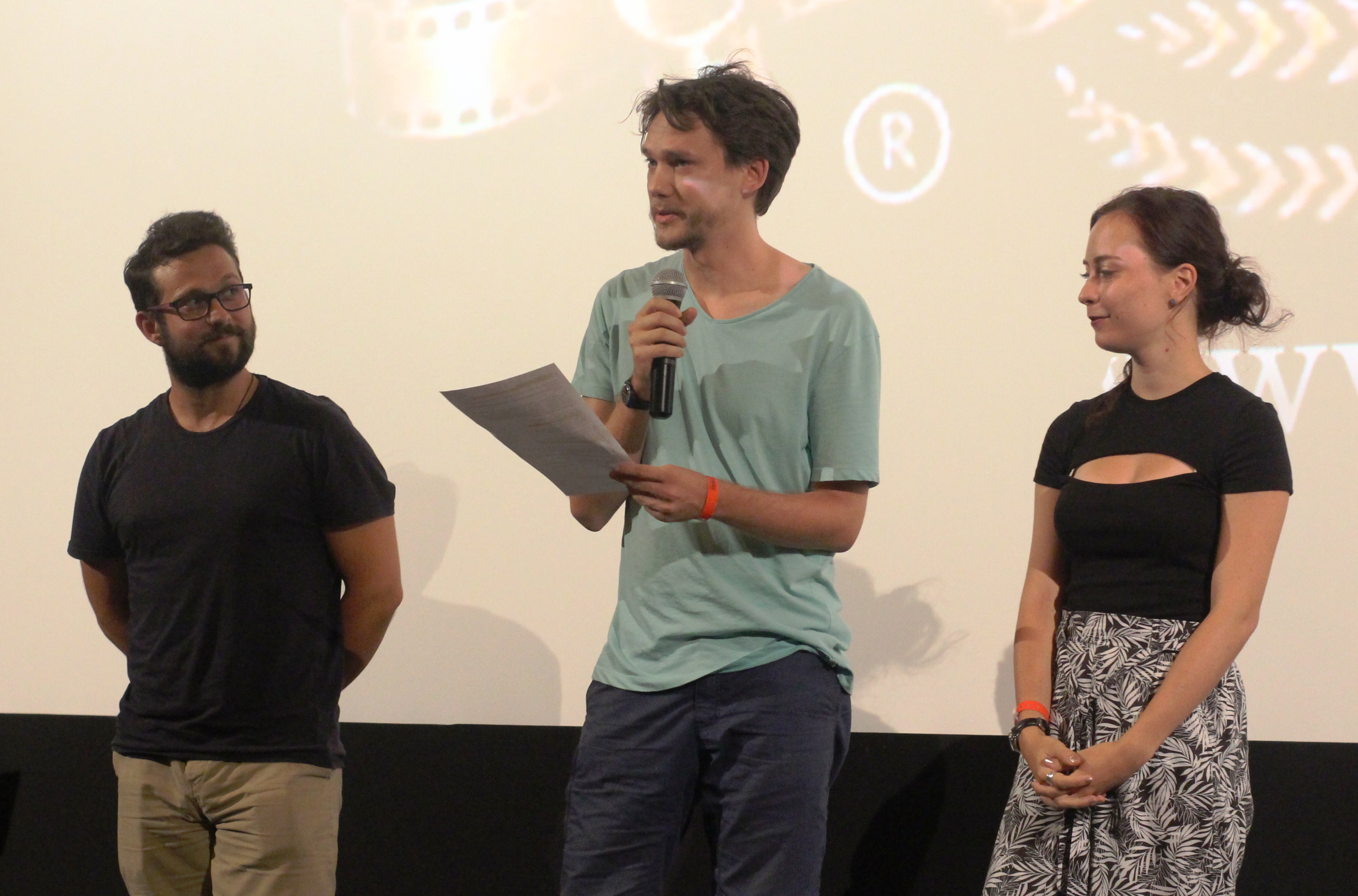 The members of the Student Jury were: Zsófia Pethő, Balázs Nyitrai, Máté Balogh, Bianka Szelestey – the first ones to step up onto the stage and share their decision with the audience.

“For taking a fresh, honest, personal and authentic approach regarding a topic that is hard to grasp. A film that is suppletory.” The prize for Best fiction was given to Hot Dog, the creation of Alma Buddecke and Marleen Valin, who submitted the film from the Film Academy at Baden-Württemberg.

“For achieving a visceral visual and associative impact by the application of outstanding montage-technique.” The best Experimental short pursuant to the decision of the Jury is the French Déguste by Stéphane Baz.

“A multi-faceted and deep visual work, oozing with creativity, which built a coherent structure with the help of the spellbinding dramaturgy.” The award for the best animation film went to none other than Flóra Anna Buda who received the prize on stage – repeating her win at Berlinale for “Entropia” – produced at Moholy-Nagy University of Art and Design.

Next up it was time for the international jury to announce their awardees. First those winners were announced who could not take part at the Award Gala in person.

The Best comedy of 2019 at Busho: Mamartuile / Alejandro Saevich / Mexico

After this the awardees present were asked to accept their prizes. 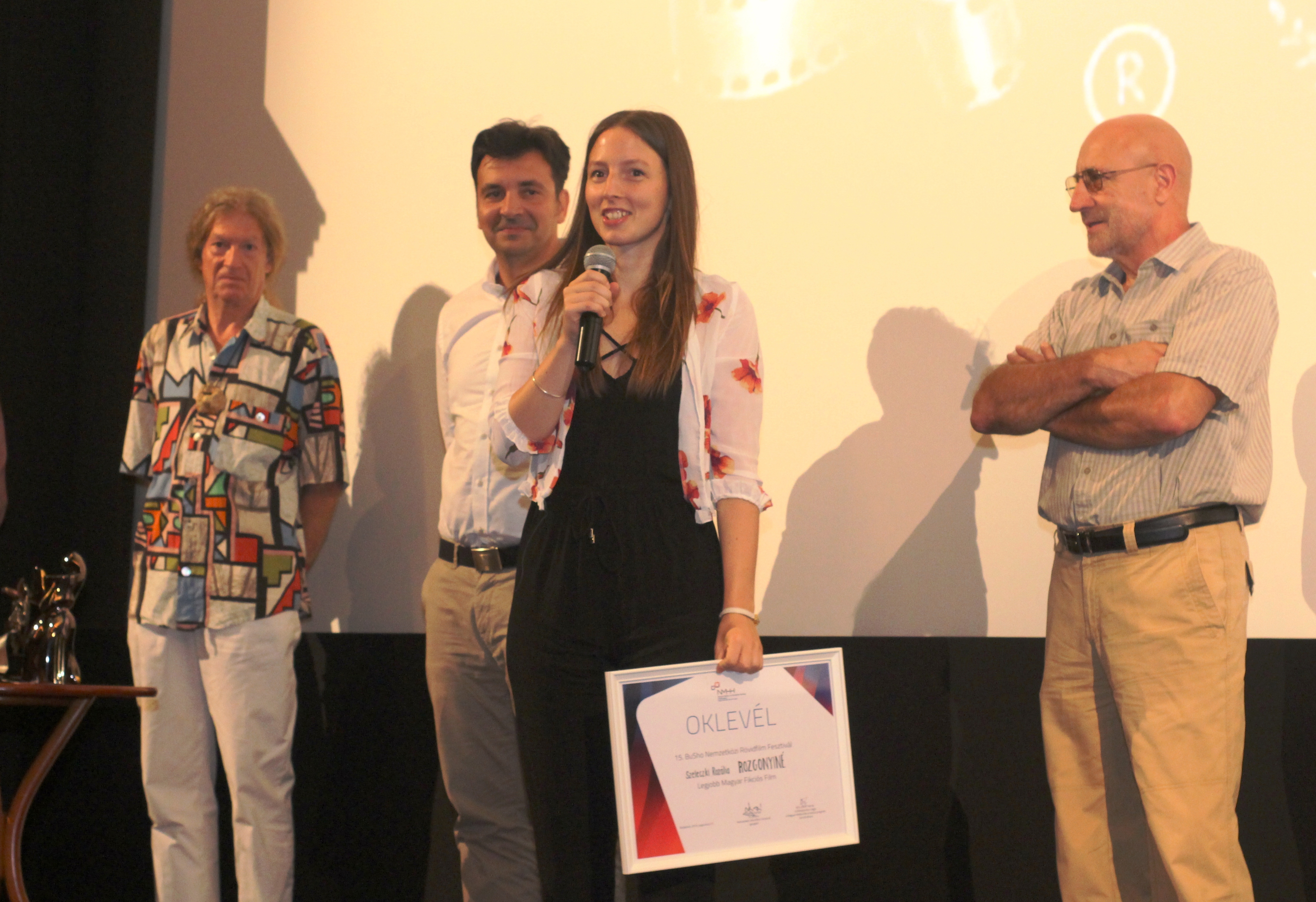 The Best Hungarian Animation in 2019 was “Mr. Mare” by Luca Tóth, the producer of the film received the award in her absence. As it turned out later, she was given an award in Odense that is bound to an Oscar-nomination – we congratulate her!

The best Hungarian short fiction film at the 15th BuSho Festival was created by yet another young lady: Rozália Szeleczki, her film “Mrs. Rozgonyi” was rewarded with the prize.

The organizers handed the special prize of Sopron over (which is a visit to Sopron with film premiere and audience meeting) this year, Ábel Regős’ “The tenants’” was the winner, a 1- 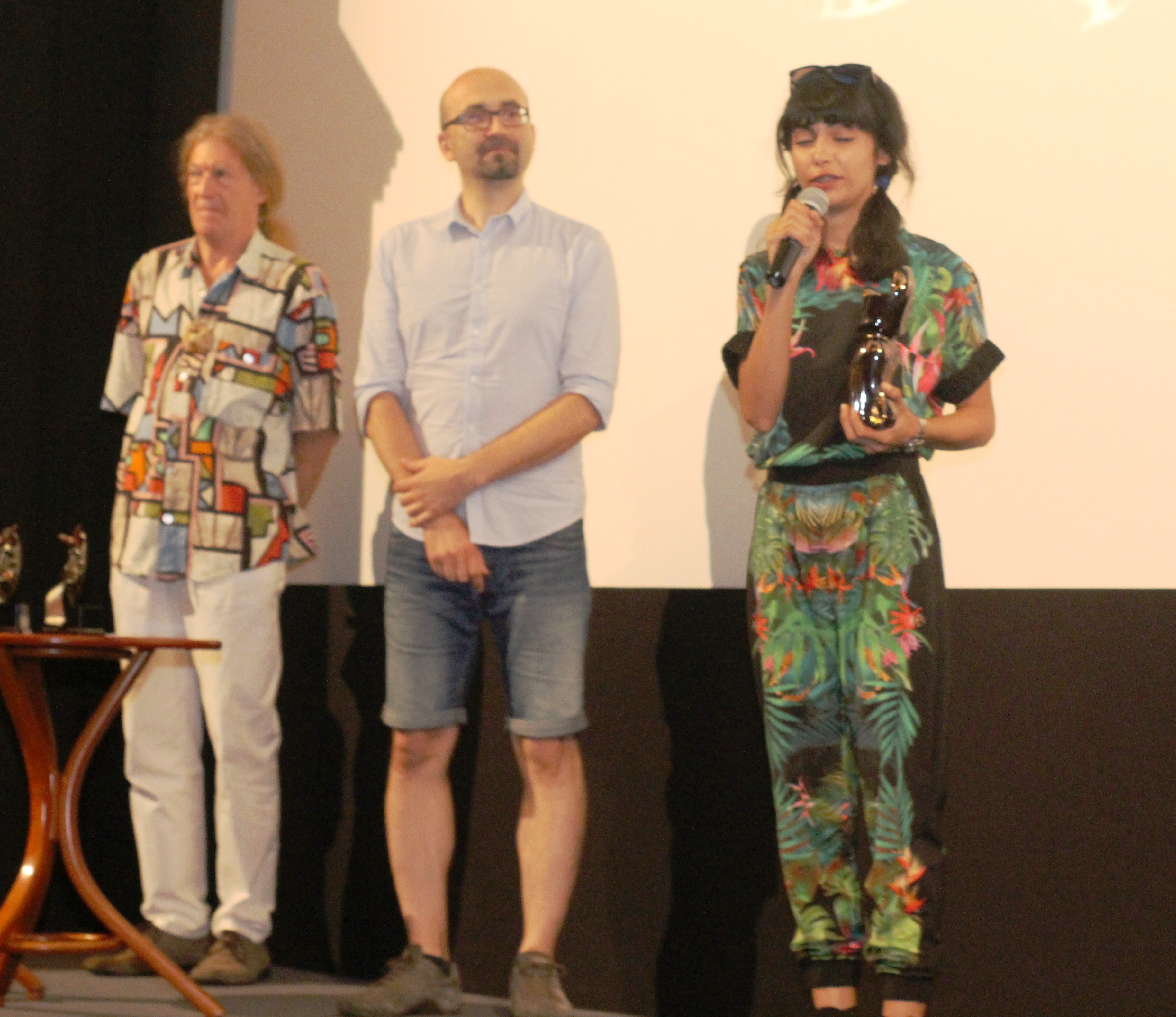 minute long excellent film that raises questions about a sensitive social topic. In the absence of the director, the prize was received by Franciska Farkas, who thanked the jury with an Ady-citation: “Let us ignite high flames in our hearts, So that ‘Never mind’ shall never win!”

Yet another special award was given: the offer of Sziget LLC: a weekly pass for Sziget Festival 2020 for a 3-members strong mini crew with permission to shoot! As per usual, this award is given to a Hungarian creation – as we cannot know who will be able to come back from abroad. However, as the crew of the Russian film “White Mark” was here with us through the whole week, and the director let us know that he is happy to come back to Budapest, he and his team will have the opportunity to visit Sziget Festival and to create a film there. 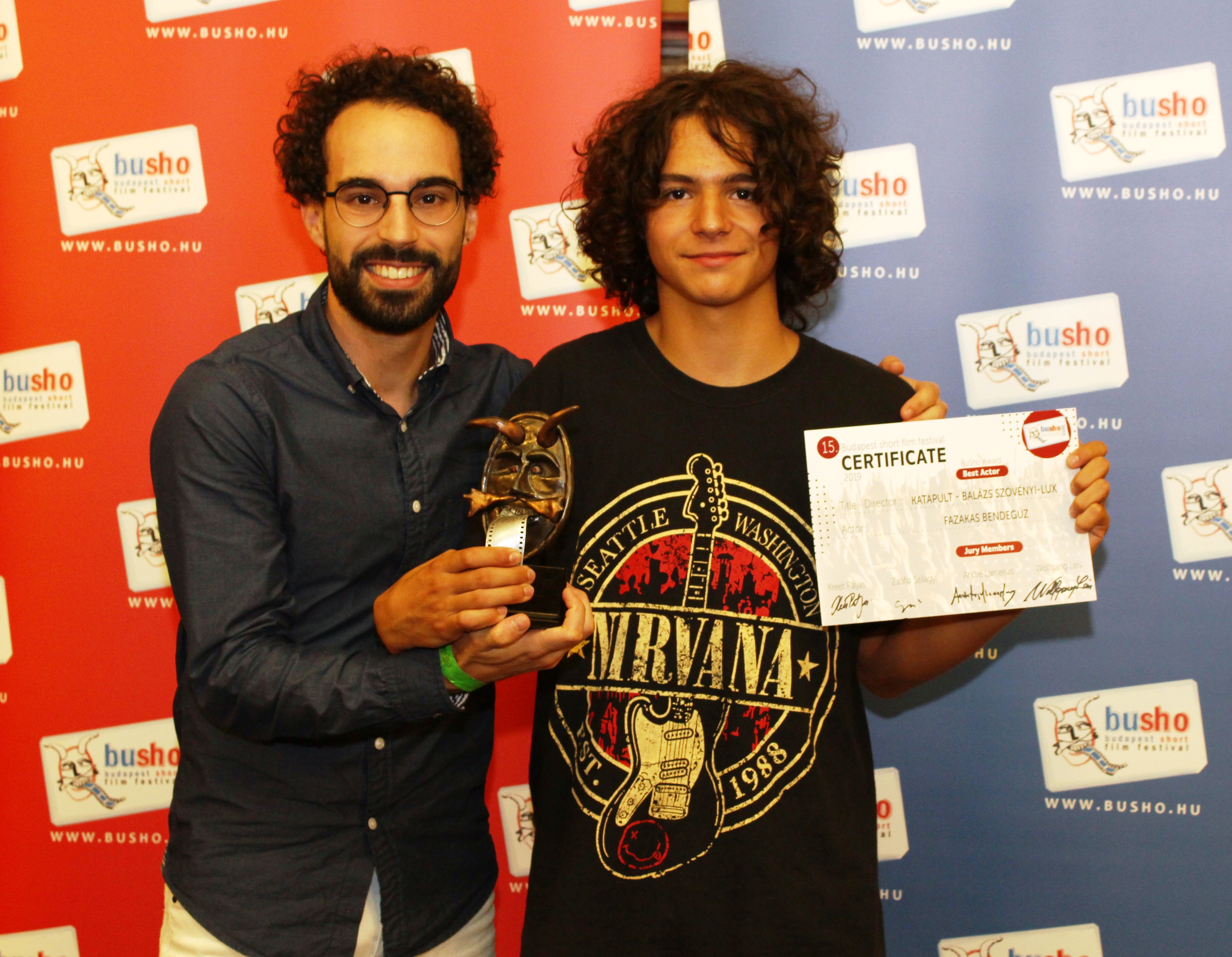 The prize for best actor was given to Bendegúz Fazakas, a rather young actor from Kecskemét,

for his performance in Balázs Szövényi-Lux’s “Katapult”.

The winner of the Best animation category in 2019 was the work of Sergei Kibus from Estonia: Teofrastus. Olga Stalev, member of the animator crew received the prize in person and she shared with us that this is her first international film festival she takes part in – and it will remain in her memories for sure.

Before announcing the winners of the main prizes, the members of the International Jury were called on to the stage. André Lameiras, Portuguese Jury Member summarized the happenings of the past week and they gave a short justification on their decision.

“For keeping the spectator physically far from the scene while actually draws us into a very complex and tense situation that makes us wonder about our personal conflict solving concepts.” 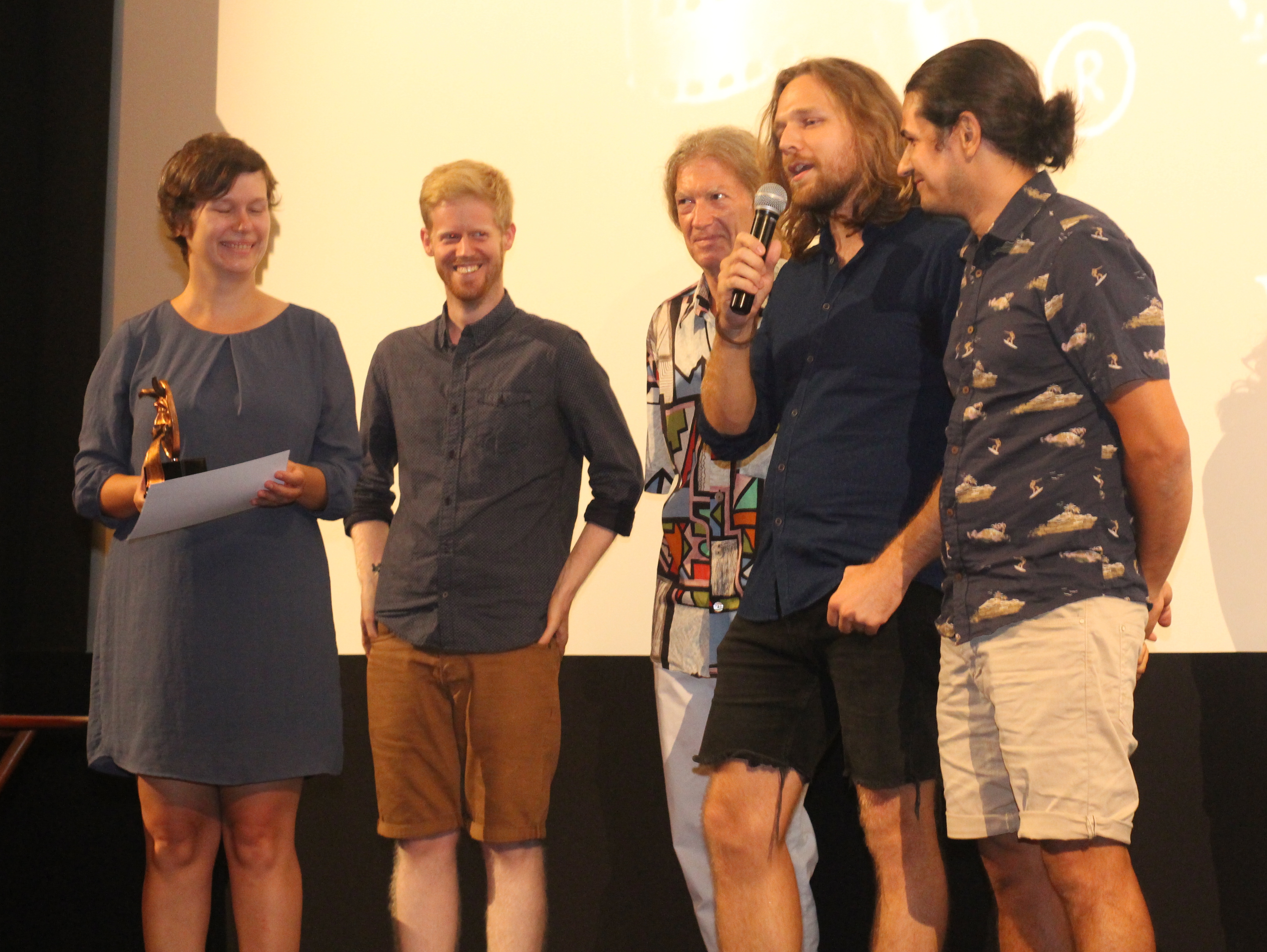 The Bronze BuSho prize 2019 was awarded to the Hungarian film “From Above” created by Nándor Lőrincz and Bálint Nagy. As we mentioned in the teaser, the one-shot experiment that uses a reality-show like camera setting draws us into a situation emerging from the annual curb-side pickup.

The winner of the Silver BuSho in 2019 “Uses everyday routines as a storytelling tool” namely Three Blades by Matthieu Maunier-Rossi.

For portraying the encounter of two women in great complexity in only 13 minutes.

The main award of the 15th BuSho was given to Claire Fowler’s Salam from the United States.

Finally, the moderators thanked the Sponsors of the Festival: the Hungarian National Film Fund, the Hungarian Academy of Arts, the Ministry of Foreign Affairs and Trade, Pensum, Biogroup Hungary, the Austrian Culture Forum, the Italian Cultural Institute, and the Camões Institute. Our cooperative partner, the Budapest Festival and Tourism Center offered Budapest welcome packages. The Award Sponsors contributed to the Prizes created by Solide Art – namely National Media and Infocommunications Authority, Sziget LLC and Mozgóképmás Association from Sopron. The Media partners are as usual Filmvilág, Film.hu, Fotovideo Magazines and Radio Klub. 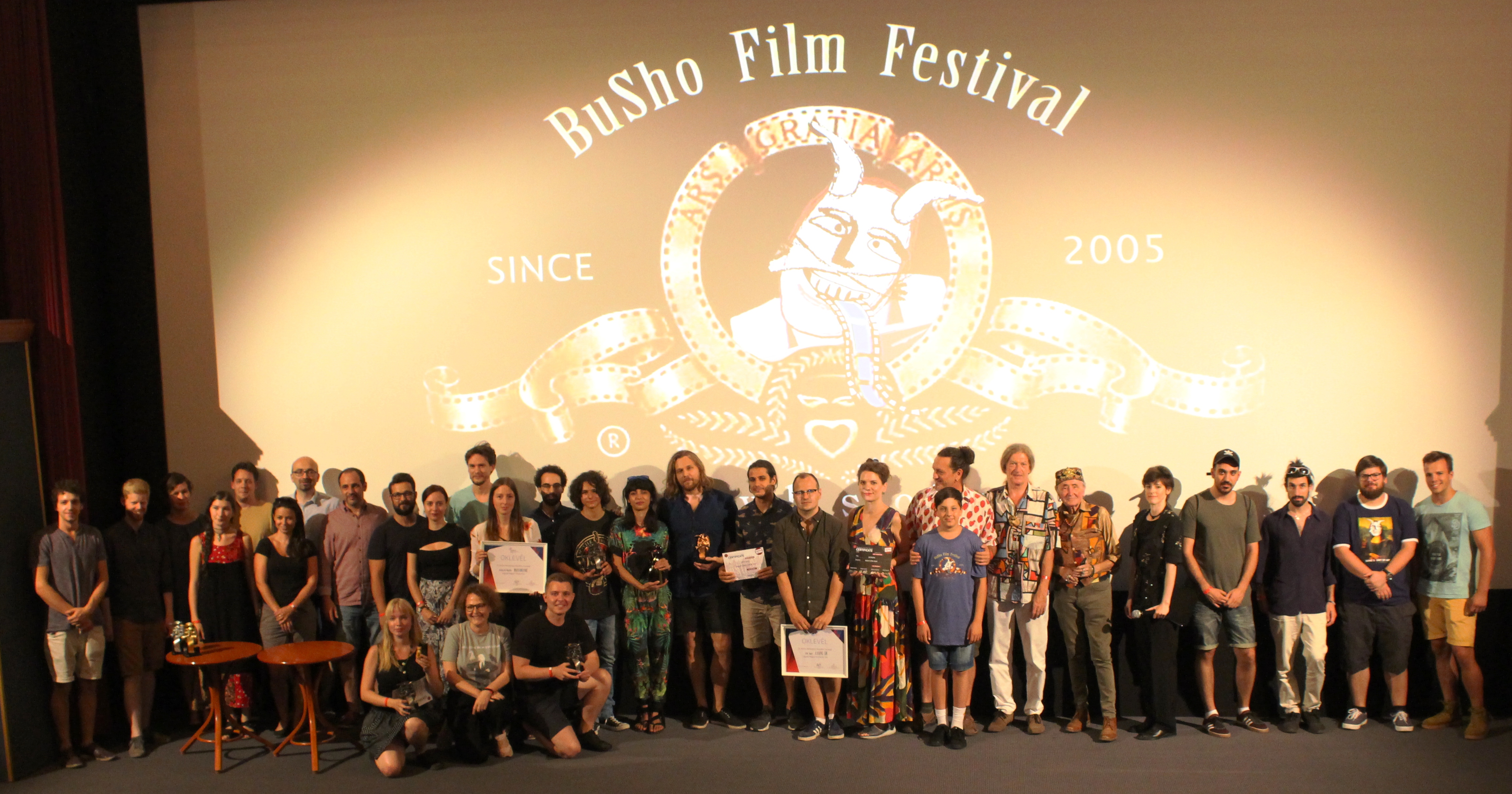