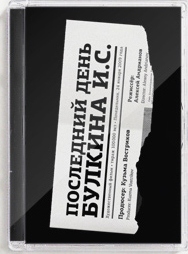 The last day of Bulkin and the 6th BuSho

It barely happens on a film festival that both the student and the main jury golden prize being won by the same film. It explains all that without doubt there was one film above the rest in the competition that experts agreed on to be the best. In 2010 on the 6th BuSho festival this is exactly what happened: the Russian made 'The last day of Bulkin' took all main prizes in the Vörösmarty cinema. An employee of some society works house-to-house. He's going to people who have to die this day, with a receipt on which they have to put a tick in stating that they were completely satisfied with their life. But Ivan Sergueevich Bulkin refuses to do it.

On behalf of the director Aleksei Andrianov the prizes were handed over to Ivan Lopatin producer of the film who was the guest of the festival.

The silver BuSho prize went to a 10 min. long Indian satire: 'The flower bud' directed by Shumona Banerjee gives us an insight of a weird relationship of a young transvestite prostitute and a straight out-of-job, obsessive, suicidal English literature teacher.

Eduardo Chapeto-Jackson's 'The End' won the silver BuSho prize of which story is based on a real danger with negative utopia in a country that was torn apart due to lack of water.

There were 3 Hungarian shorts that got awarded: the best cinematography to Róbert Maly for the pictures in 'The tailor of Ulm'. The animation of Krisztina Ágói titled 'Secrets they be' was given two prizes, the best idea and the Transylvanian Oradea's jury special prize. Nevertheless the cult piece Alexei Alexeev's 'Log Jam' won the student's jury special prize.